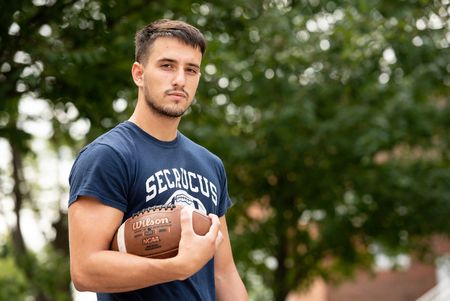 After falling in love with the sport as a young child, Senior Spotlight: already appreciated every moment spent playing football. But after suffering a torn ACL three games into his junior season, and a grueling months-long rehab process, every play will feel even more precious for Tolaj in his senior season.

The four-year varsity starter will return to the field at a new position on offense this season. After serving a starting receiver since freshman season, this year he moves from backup to starting quarterback. It’s nothing new for the senior, who is used to playing multiple positions and juggling several different roles.

He will again line up as a starting safety on defense, where he earned All-NJIC Meadowlands Division Second Team defensive honors in 2018.

How long have you been playing football?

Since I was in about first grade, my cousins really got me into it. My family is not too big on football, but one of them played at Rutgers, I got to see a lot of the games and I kind of fell in love after that.

Do you have a memory that stands out across all the years you’ve been playing?

When I used to play for the rec football team with the upperclassmen – who are now in college – those memories are really special to me.

Do you have a favorite NFL team or player?

So was Tom Brady your favorite player?

Not right now, he left us. As a receiver, I really like to watch DeAndre Hopkins.

If you had to pick one other sport to be magically great at, what would it be?

Definitely soccer. My family are all from Europe, and European soccer is on another level of crazy. Being able to play in one of those stadiums would be pretty cool.

Who inspires you in your life?

Probably my mom. She is just a very strong woman, been through a lot of adversity, gone through some difficult times. But she always manages to spare time for her kids. There has never been a time I called my mom and she said she can’t be there – she’s always there.

Do you have a favorite musical artist?

Do you listen to him to pump you up before a game?

Pre-game I like all types of music, sometimes I listen to AC/DC for example.

“Breaking Bad,” my sister got me into it. I was watching “Ozark,” it was pretty good, finished “Sopranos” recently – going down the list.

Favorite restaurant or style of cuisine?

It’s got to be Albanian food.

If you could pick one superpower, what would you choose?

Probably the power to stop time. I feel like time goes by too fast nowadays, I’d like to slow it down a little bit.

Talk about the ACL injury you suffered and how has your recovery gone?

The injury itself was pretty devastating. At that point – it was the third game of the season, second quarter versus Pompton Lakes – I felt like I was in the best shape of my life and feeling pretty great about how I played the two games before. I was pulling out to make a block, planted in a pothole, and that’s how it happened, no contact or anything. The rehab was crazy, everything that came after has been crazy, it’s not easy. The rehab was tough, I wanted to show up every single day and do as much I can, but there’s only so much the body will let you do. But now I feel great, I think God I’m even stronger than before.

How much sweeter is this upcoming season after going through what you went through?

I have so much appreciation for this season, just every part. I want to enjoy every single moment with my friends, my teammates. I don’t want to miss out on any opportunities.

How much are you looking forward to being a leader on this team as a four-year starter?

I feel like I’m ready, my time has come – I can get the job done.

How has the transition been from receiver to starting quarterback?

Not really that big of a transition for me, I’ve always been the guy to move around everywhere and be put in uncomfortable positions and made myself comfortable. That’s how I feel at QB, I don’t feel like I’m under any pressure or stress, I feel like I can get the job done.

What are your ultimate goals in your final season?

Have a better record than last year, the best record in all four of my years. I just think that it’s definitely going to be a different atmosphere, different for everyone here to play football and not have people watch. But we’re football players, we just want to play.

What his coach has to say:

“Veto has been an outstanding player ever since the day he started for us his freshman year,” Secaucus football coach Charlie Voorhees said. “What makes him special is his ability to play any position on offense, defense and special teams. But what we respect most about him is his toughness.”