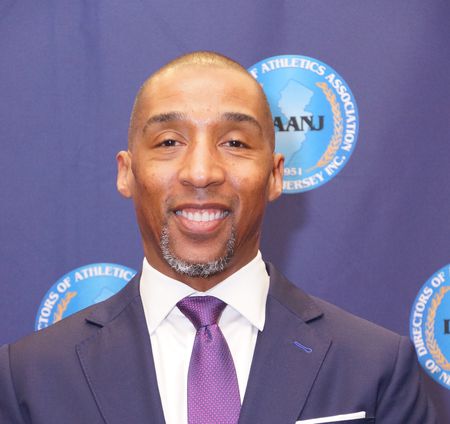 Widely respected throughout the state as a leader in high school sports, David Frazier will take his vast experience to the national level.

Entering his 19th year as the athletic director at Rutherford High School, Frazier was recently appointed to serve a four-year term as an at-large member of the National Federation of State High School Associations (NFHS) Board of Directors.

“It’s an honor. The Board of (Directors) is not a 100-panel board, so I’m privileged to be one,” said Frazier, a former president of the New Jersey State Interscholastic Athletic Association (NJSIAA) Executive Committee.

“I look forward to working with the administration and bringing my experience, knowledge and even some New Jersey flair to the board.”

“With his innovation, drive, and love for athletics – plus outstanding experience as a professional educator – Dave is an ideal candidate for this position,” said Colleen Maguire, who was recently named the NJSIAA’s chief operating officer. “I’m confident his expertise and passion will have a tremendous positive impact both on the NFHS board and the thousands of scholastic athletes across the U.S. who it represents.”

In his role with the NHFS, Frazier will act as a governing board member for Section 1 (Connecticut, Maine, Massachusetts, New Hampshire, New Jersey, New York, Rhode Island and Vermont) and Section 4 (Illinois, Indiana, Iowa, Michigan and Wisconsin).

“It doesn’t surprise me that this opportunity has come his way. He embodies everything an AD should be from a personal and professional perspective,” said Mainland’s Mike Gatley, the 2020 Directors of Athletics Association of New Jersey (DAANJ) AD of the Year.

“I’ve always found Dave to be 100% for the kids. He’s a consummate professional and a great role model for any up-and-coming athletic director.”

“He’s awesome; a cool customer and somebody who listens to everybody,” said Kevin Murphy, athletic director at Washington Township and also a member of the NJSIAA’s COVID-19 Sports Advisory Task Force. “He takes all sides and is very measured in his thoughts. He has a real ease about him when communicating with people and it’s been a pleasure working with him on the task force.

“Dave is just a super person who relates well with everybody he works with. The NFHS is getting a true New Jersey guy, a top-flight person. New Jersey will be well represented on the national stage.”

“I’ve had the opportunity to work with Colleen on several boards within the NJSIAA. She recognized that I might be able to contribute at the next level,” said Frazier, a former All-American in the triple jump at Manhattan. “An opportunity opened up and fortunately she thought of me as someone to nominate for the position.

“Not everyone will go pro, but high school sports allows students to experience education-based athletics. It still plays a huge role in communities and high schools. I can’t imagine not having it. Even now, in a pandemic, it plays an important role and most people understand that. It really does prepare you for life.”