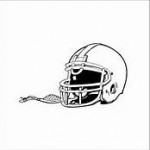 From : The Record Sports Staff

The Bucs, ranked No. 25 in The Record football Top 25, rushed for 390 yards and five touchdowns Saturday, stretching their winning streak to six games with a 44-14 victory over Queen of Peace in NJIC Patriot Division action at Feigel Field.

The Bucs have opened the season 5-0 for the first time since their unbeaten, North 1, Group 1 sectional title in 2006.

Anthony Ovalle led the attack with 172 yards on 10 carries, scoring two touchdowns and two, two-point conversions. Zayn Ksiyer ran for 99 yards and two touchdowns, and Austin Urbaez picked up 69 yards and a touchdown.

ST. MARY 28, WEEHAWKEN 6 (at Rutherford): Senior running back Keon Banks carried 19 times for 172 yards and a touchdown as the No. 15 Gaels (5-0) kept pace with Bogota atop the Patriot Division.

Will Verrico rushed for 60 yards and a touchdown. Nick Posimato had two interceptions as the Cardinals posted their first shutout.