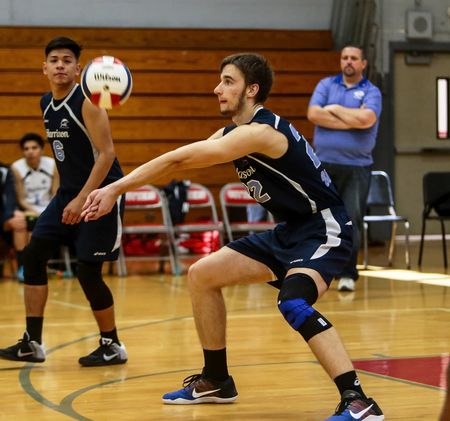 By Jason Bernstein | For The Jersey Journal

Piotr Namiotko is not ready for his competitive volleyball career to end, even if it means driving hours at a time for the chance to play.

That’s the reality of trying to start a professional career in a developing league amidst a pandemic. So for the former Harrison High School and NJIT standout, the opportunity to continue taking the court with his teammates with the Tyrants and Team Freedom of the National Volleyball Association means a great deal.

”Practicing has been a little bit less than usual, but everyone tries to make the best out of everything and that we actually get the opportunity to go into the gym and get some touches,” said Namiotko about the Tyrants, who primarily practice at Sideout Sports in Fairfield. “Everyone’s always happy that we’re able to actually get in and get some touches together to hopefully prepare for tournaments and showcases. So for us, any kind of chance to get in the gym, touch a volleyball and play around is a good time.”

Namiotko, who moved to Harrison from Poland at the age of 12, was first introduced to volleyball by his cousin Ziggy Goryn, a former star hitter at Wayne Hills. Goryn first started taking Namiotko to open gyms when Piotr was in eighth grade and eventually to practices with the Warren Six-Pack club team.

Soon after, Namiotko started encouraging friends Maciej Gaus and Michal Niczewski to join him at open gyms in Harrison.

With Namiotko, Gaus, Niczewski, Jimmy Vegas, Frank Contreras and others, the Blue Tide emerged as one of the state’s premier programs. Despite being one of the smallest volleyball playing schools in the state, Harrison won back-to-back Hudson County and NJSIAA North 2 sectional titles. In 2016, as a senior, Namiotko recorded 512 kills and earned First Team All-State honors at outside hitter as Harrison reached the Tournament of Champions final.

At NJIT, Namiotko recorded 490 kills in a college career cut short by the coronavirus. In addition, he has had two U.S. National Team tryouts with its college select squad.

For Namiotko, who has been involved with Team Freedom for a couple of years, the idea of playing professionally in the United States was brought to his attention by Bayonne alumnus and current NJCU Women’s Volleyball coach Justin Beaumont this summer.

Right now, professional volleyball in this country isn’t as as prominent as they are in places like Poland and other European nations, but Namiotko sees a promising future for the NVA.

”They’re trying really hard to be able to sponsor teams and create teams in order to run as professional of a league as possible like you’ll see in other countries such as Poland or Russia or France,” said Namiotko. “As of right now, it’s up-and-coming, but I believe the direction they’re going in right now, a normal professional life will be available in America, not just overseas.

Namiotko’s first tournament with the Tyrants was in November in Salt Lake City, Utah. Due to the current COVID-19 restrictions, the NVA’s next tournament isn’t likely until the spring. In the meantime, he’s trying to stay in shape and continue to work towards his goals.”

My end goal was always to go professional and maybe play on the national levels,” he said. “Hopefully one day I can maybe be able to join a lower level national team and see how far I can reach.”