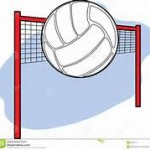 April 12, 2014
By GREG TARTAGLIA
SPECIAL TO THE RECORD
The Record

LYNDHURST — Mostafa Hassan made a bold proclamation for the 2014 Lyndhurst boys volleyball season.

“We’re going to make school history for most kills, most digs and most assists,” the senior said Thursday, barely concealing a wry smile.

The Golden Bears are in their first year of existence and approaching it with gusto. Forget starting at the JV level, they already have a varsity and a JV populated with more than two dozen players.

“It was a really popular sport in phys ed,” junior captain Tom Hooper said. “So a lot of kids wanted to start a team and see how we’d do in a league.”

Most startups try and ease into things with an independent schedule. Lyndhurst has gone right into the competitive West Jersey Volleyball League with 2013 Hudson County finalist Harrison and North 1 finalist Vernon.