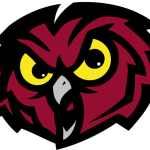 PARK RIDGE – A pitchers duel between Park Ridge junior Erica Huber and senior Samantha Keating of Pompton Lakes ended on a play in the bottom of the seventh where the ball never left the infield.     The Owls were trailing 1-0 in the May 21 quarterfinals matchup with their 4-5-6 batters coming up. Sophomore Angela Rivera slapped a base hit to right to get things going. Her single came on a 3-2 count, the first 3-2 count in the game.  Junior Anna Lembo, center (holding helmet) scored the winning run from second base on an infield out as Park Ridge topped Pompton Lakes, 2-1.

“I can’t really get nervous because you just have to do your job,” Rivera said. “You can’t really think about having two strikes. My job was to hit the ball and get on base so we could get some runs. That’s what you have to do every time.”

“We knew we just had to get base runners on – that was our goal,” said Owls coach Cindy Turner. “We were pretty confident with Ang (Rivera) coming up – she had gotten a nice hit the at bat before. I told her to be very cool under pressure and she just did what she had to do. She put the ball in play and got things going. We sacrificed her over to get the run in scoring position and went from there.”