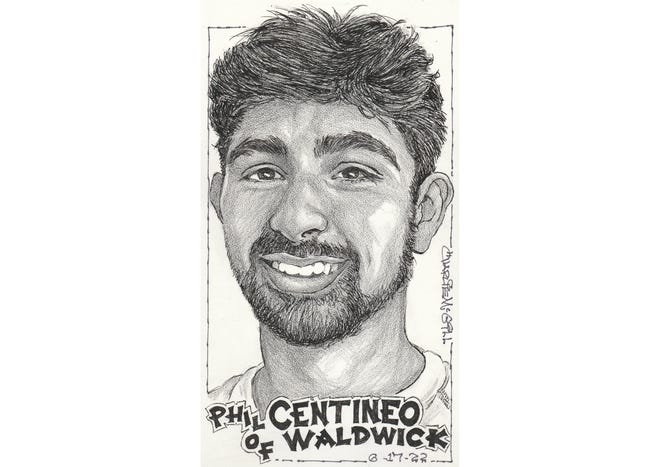 In the final and semifinal, he went 3-for-7 with two homers, five runs and six RBIs.

Centineo is a hard-nosed, hard-hitting senior from Waldwick who’s turned the small borough into a big winner. This year, he won a state title in soccer and a sectional title in baseball by showing a resilient attitude.

Broken bone? Shake it off.

Short rest? Bring it on.

It’s one thing to leave a legacy at Waldwick. It’s another to embody the school nickname: Warriors.

“I like to compete for the guys,” Centineo said. “I do anything to win.

People in Waldwick will talk about the latest victory for a while. They’ll remember how the Warriors scored nine runs in the last two innings, outlasting Wood-Ridge, 13-10, in Friday’s North 1, Group 1 final.

Centineo (1-for-3, two RBIs) was a catalyst all season as he hit .563 and drove in 46 runs in 31 games. Coach Dan Freeman credits a more patient approach, as well as the backyard work in the Centineo batting cage.

Centineo also sports a 2.46 ERA after winning the semifinal on only two days’ rest.

“My arm didn’t feel that bad,” Centineo said. “I took pretty good care of it so it was ready to go.”

The Warriors had big things in mind this season with Centineo and Ryan Woolbert in the rotation. It led them to put together an ambitious schedule that included Big North powers Ridgewood and Westwood.

Instead, the depth chart took a hit in September when Woolbert went down with a torn UCL.

So before the season, Freeman went to Centineo with a proposal. The right-hander could rack up wins and strikeouts against lesser opponents or get the ball on Saturdays in the tough independent games. Centineo chose the latter.

“It kind of speaks to his mentality,” Freeman said. “He wanted to put our team in the best position to win and also challenge himself.”

Centineo brought that same mindset to the soccer season, even with college baseball in his future. He was a regular at summer workouts and meetings as the team’s starting outside back.

It wasn’t until after the season when coaches learned that he competed with a broken bone near his pinky toe.

“It was definitely tough but I wanted to grind it out for the team,” Centineo said. “I know I’ve been playing with these guys for so long and would have one last ride with them. I wanted to make it count.”

Centineo could have been mistaken for a hockey star with his playoff beard and missing teeth in the state final last fall. As the story goes, Centineo came over to Waldwick soccer coach Jon Noschese with some chiclets in hand after taking an elbow to the mouth.

Before long, Centineo was back on the field to help Waldwick collect its fifth straight shutout.

“We wouldn’t have won it without him,” Noschese said. “He’s a key part of our defense. He’s a character guy. He keeps us loose. He’s a funny kid. He’s like the soul of the team.”

Centineo is committed to play baseball at St. Lawrence in upstate New York. He sought out a school with a good geology program, having been drawn to the field from a young age.

Some people may shy away from the harsh weather along the Canadian border, but Centineo insists that he doesn’t mind the cold. He’s got a thick skin and a new smile.

“I’ve had a lot of teeth incidents,” Centineo said. “I got my permanent fake teeth now so I don’t have to worry about that anymore.”