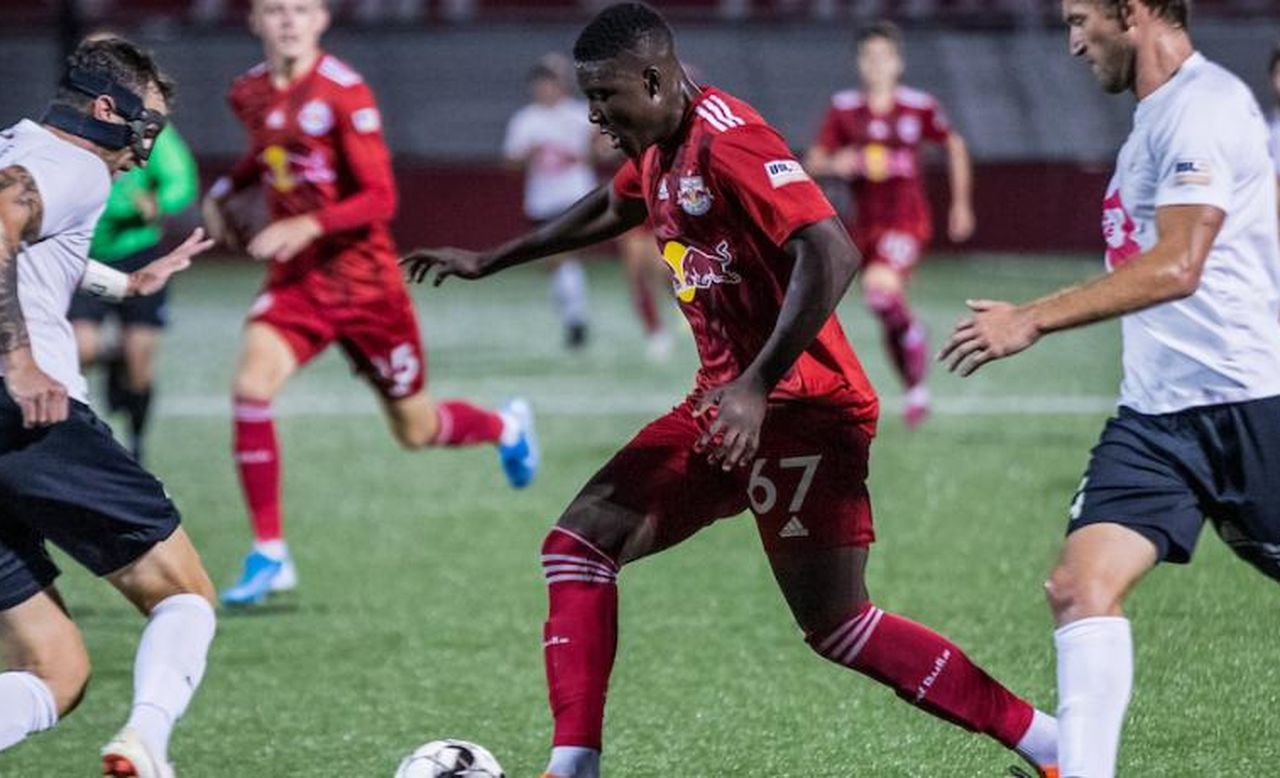 By Jason Bernstein | For The Jersey Journal

Omar Sowe grew up playing soccer for hours upon hours at the famed Harrison Courts in the shadows of Red Bull Arena. Sowe has now gone from the confined turf and chain-linked fences of the courts to New Jersey’s biggest venue for soccer.

On Saturday morning, the New York Red Bulls signed Sowe, a Harrison native and Harrison High School’s career scoring leader to a year-and-half contract. The signing, which includes two additional options years, allowed Sowe to fulfill a childhood dream of his and one his hometown has had since ground broke on Red Bull Arena more than 12 years ago.

Less than 12 hours after the signing was announced, Sowe entered the game in the 70th minute of Saturday night’s match against D.C. United, becoming the first Harrison native to ever play for the Red Bulls. Sowe played the final 20+ minutes of the 1-1 tie.

“This is all I ever wanted my whole life and this is the first stop,” Sowe said in a postgame interview with newyorkredbulls.com. “There’s a lot more coming and hopefully we’ll get the results (we want) next game.

“I’m glad the coach had the trust to put me. I wasn’t really expecting it, but you got to be ready for everything. I’m super happy, I’m super confident in this team and that we can get results. I’m really, really happy to make my debut and there’s nothing better than playing at home.”

The 20-year-old Sowe had been playing for the team’s USL affiliate Red Bulls II. Sowe, who signed with Red Bulls II in August, 2019, just a couple months after graduating high school, had a team-high six goals in 21 games this season. Sowe also played for the Red Bulls Academy team in 2018.

“I think Omar Sowe played some very games with the second team the last few weeks.,” Red Bulls head coach Gerhard Struber said after the game. “I think in the USL he was very successful, he scored some goals. And in training, he impressed me. He’s more and more ready to be an interesting player for my team. This is why we brought him up and I’m giving him the chance to play.

“He had some good moments and some moments to learn. He’s young, but we can see that he’s an interesting weapon and hopefully he’ll have a very good future with this club.”

“We are pleased to promote Omar to the first team” Red Bulls Head of Sport Kevin Thelwell said in a press release announcing Sowe’s signing on Saturday. “Omar has been a rising talent since he joined the organization. We hope he continues to carry over his positive progression to the first team.”

Sowe and his family moved to Harrison from Gambia in March of 2020, just a few months before the Arena opened. Soon thereafter, he and his brothers Modu and Mustapha were regulars at the Harrison Courts. Omar and Mustapha served as ball boys for Harrison High School as oldest brother Modou starred for the team, earning Star-Ledger Boys Soccer Statewide Player of the Year in 2012.

A few years later, Omar would rewrite the record books at Harrison, setting the school’s single-season scoring records as a junior in 2017 with 37 goals and 31 assists. He graduated as Harrison’s all-time leading scorer, finishing with 89 goals and 67 assists. He twice earned All-State honors by NJ.com and as a senior was named the North II Regional Player of the Year by the New Jersey Soccer Coaches Association.